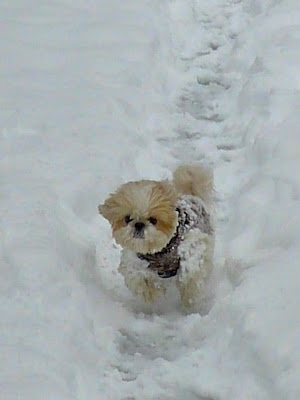 Is there anything that looks happier that a puppy playing in the snow....
So, the big snows came, the skies fell, the city was covered. Though this time only playfully so.
I've discovered that it's very difficult to photograph snow well. I've adjusted this one in Aperture and I think now that I've only made it look like a more pronounced grey. The snow actually looks much lighter to the eye than it does in this picture, though the puppy doesn't seem to mind.
Hopefully they will call off work tonight, the massive machine of industry will halt and stand growling for a moment, and the villagers will run free, though mostly they will only run home. "People are not going to dream of baboons and periwinkles"
Catching puppies in white weather.
Posted by Sean Q6 at 5:35 AM