The feeling of freedom 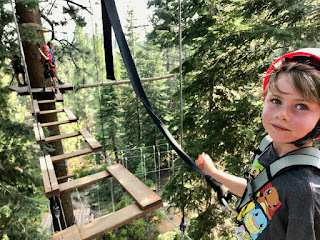 Well, the vacation is over, in a sense. The biggest part of it is over - my brother and his sons have left for the airport. I don't return to work until Monday. It was good to see the boy have fun with his cousins, something I never had. Or rather, I had a cousin named Jane but only met her once and have no idea what happened to her. My uncle - my father's brother - died when I was very young. I barely remember it. I only remember my father crying when he got the news, a rarity and something that left a postcard memory in me. He was not known for showing emotions that hinted at vulnerability. Yet he was a thoughtful man, I discovered a bit late in his life, and mine.

My mother - like my son and his mother - was an only child. Small family all around, though numbers alone hardly tell the story. Family can be a sometimes difficult burden with one member or a hundred. Though this week was not burdensome. Tiring, but not weighty. I was a little bit concerned that it would prove to be oppressive, but the opposite was true. It was satisfying to have it happen at all, to see Rhys in the context of a family that is foreign to me.

Perhaps mom has a "rounding" influence in her new role as "Auntie Rachel." We'll chalk it up to that. Women are very good at so many things. She was perfect this week, likely saving me from myself any number of times.

I want to buy a condo in Tahoe now. After spending three days there I realized that should be our getaway place. It's peaceful and beautiful and offers all sorts of great outdoor options. I wished that I would have brought my mountain bike with me.

I rode it as soon as I got home, few things in life make me feel quite as free.