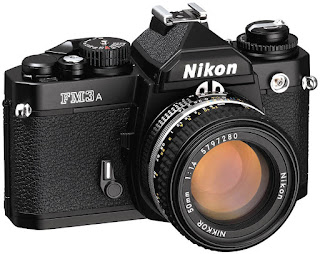 I left NYC seven years ago this week. It's the only timeframe that has ever made any sense to me, one in which I can place events correctly in relative chronological distance from the present. It has to do with measuring time through the life of my child, but it works better than any calendar or set of personal memories outside of that experience. It also represents the same basic time that I started shooting film in addition to digital images.

I received my new vintage used camera in the mail from Japan yesterday - the Nikon FM3a. It is what I expected it it be - a noticeable improvement from the other F series cameras that I have in both design and function. It is considerably newer, so it feels better, somehow more intentional than the older cameras that all have their little quirks, all accumulated over time.

I can now maybe get rid of one or two of the ones that I have, if I choose to. I will hold on to them and claim that it is for sentimental reasons, but that's a lie. The truth is that I can load each of them up with a different kind of film so that at any given time I can pick up the camera that holds the film that I wish to shoot with at that moment.

I am a spoiled child.

I own five Nikon manual film cameras. Many with similar interests to mine would probably say that I already own every one that is worth owning, but I would still listen to someone that told me I needed an F3 or an FG or both, to complete my "collection." I suspect that I don't need either of those. Some might tell me to throw the EM away, but that's the one I bring to the beach with my cheap lenses.

The new one cost me $600 - three times the price of any of the others, and one that I told myself over and over that I did not need to buy for that very reason.

My logic always seems to hold, as long as I don't try to convey it.