This Be The Verse 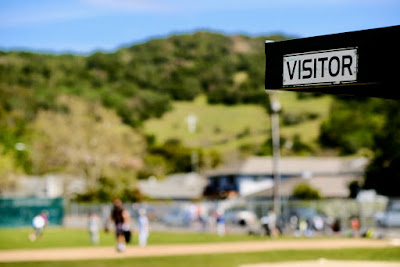 Things move up and things move back. Everything starts to fall towards a semblance of a familiar place again. The baseball season is under way - AA Little League, which I found comical.  Dads have stern talking-tos with their kids learning to play baseball, upset that they didn't do well. Demands to toughen up. You can see the anxiety in the kids' bodies, the fear of not performing well as they go to bat. You wish that you could help them, to tell them anything that would change the feeling, though not entirely sure if the child on the mound would send you back to the dugout, either. It's a tough thing to watch. Then you see the parents, usually the fathers, and you know at least a part of where it all comes from.
They fuck you up, your mum and dad.
I anxiously await to hear from my CPA. To see if there is any magic that he can pull that will prevent me from giving all of my money away to the government. The more he looks through my records the more he asks me why I don't have a financial advisor. I have mismanaged my money for no reason, and now much of it will need to be given to the government. They are very against the things that I have done, which was just put as much as I could in savings. He has hinted that there might be some good news, but then he went silent for several days.
Ah well, I was only going to buy a new car or a used house. My life lacks direction from too much waiting.
Raquel just now asked from the other room, would I like to go eat oysters?
... my heart was going like mad and yes I said yes I will Yes.
.
Posted by Sean Q6 at 5:11 PM