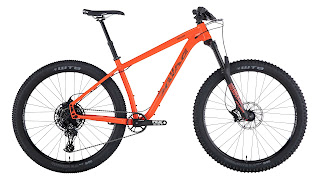 It was time for a new bike. Rather than put money into my old bike this new bike kept talking to my thalamus, pons, and cerebellum. So, I bought it after special ordering it from a local store. I went riding today - about 3 hours, 16 miles, and 2400 feet in elevation differential (for the Strava nerds that might be reading).

It has several attributes that my other mountain bike - a 2016 Kona Honzo AL - did not: 27.5" wheels, dropper post, and a 1x12 cassette for greater gear range.

So, now I own two mountain bikes. My needs outgrew my possessions.

CS is still in the hospital. I, of course, worry about him. So many things are unfair, but to be hospitalized for long periods of time can be dispiriting, to say the least. Recovery is not always the word to describe what happens afterwards, either.

I once had a pretty terrible accident with my foot. I was about 17 and CS would have been in his early 30s. This was about the time when we first met. I almost lost my foot, but a French laser microsurgeon - Lionel Foncea - was able to save it. I was told that I might not ever be able to walk normally again. CS sent a card to the hospital, letting me know of his concern. It was not the reason we became friends, but I remember it as being a sympathetic generosity many years later.

I'm not sure why I have developed such an interest in mountain biking as I approach 50 years of age. Maybe the answer is dull and obvious - that I am just having an existential crisis, one of chronology. The decades distant somehow narrowing the impending.  Perhaps I am looking for an escape route, a loophole, an alibi carved along the fibers of the heart, a getaway from decades gone. A getaway from getaways.