The tunnel at the end of the light 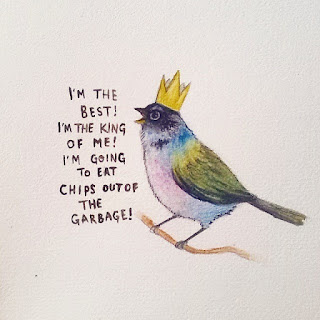 (unknown artist, but not unloved)

I have started writing emails again. Since this site was predicated on the idea that people don't write, read, or bother responding to emails anymore, I have been writing them again. It's been nice and I have connected with a few old friends in different ways.

My one continuing email correspondent - the Scottish anarchist from the Netherlands - has not had one written by me yet, so maybe I should avoid advertising my failures in that regard here, but what the fuck... as with most all things I am always exaggerating. I've only written a few emails, mostly in response to a birthday invite I sent out for Florida in November. I'll be turning 50, so I sent out a save-the-date.

My birthday is in October but there were scheduling conflicts with one invitee who will probably end up not being an attendee. It's the way of things - the most difficult people at the onset of any event's planning are most often the ones who do not attend. I am kidding. She is a very crazy woman, yes, but nothing if not genuine in her commitments.

People are always fictionalizing people, writers even more so. People have an unhealthy obsession with the idea of objective reality. Few people have disrupted this notion as much as Trump, for good or ill. He is not only impervious to the idea of objective truth, he also seems insusceptible to his own impressions of sustained personal subjectivity.

So, if you want an email then write me one. I'll write back. I have put some creative effort into a few of them. Writing for individuals is different. It's not nearly as easy to make jack-off jokes towards the subject of incest. It requires intense and uninvited use of personal resources, and the requirement that the reader can not opt to escape.

No, I can of course write about other uncomfortable subjects, also. Just give me an idea of what bothers you most deeply and I'll give it some thought.

(The mighty John Huston, and Jack)