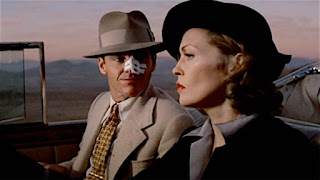 There was a screening of it last night, here in Sonoma, at the historic Sebastiani theater. I was there of course, with buttons and bells on. Or rather, with wine and roses. The film is an absolute miracle - everyone deserves one of those from time to time - each scene more fascinating and beautiful than the last, or fraught and terrible, each turn of phrase more clever than the one that preceded it, each witticism delivered as if conversations of that kind just occur naturally, and in perpetuity.

I had forgotten that this was the film where I stole the line, as little as possible, when Nicholson's character was asked what he did in Chinatown. I have been using it as a rebuff to the question, What do you do for a living? for several years now.

Now, I suspect I know what you're likely thinking: but Polanski is a celebrated child rapist... Harsh words which are technically true - he is celebrated and the charges are still pending. He famously fled the country when it was discovered that the judge secretly planned to not honor the plea deal to which he had previously agreed. He was going to sentence Polanski to 50 years in prison. Had he not fled the country the case might have been thrown out because of this lapse in judicious behavior. Some have demanded that this be done in absentia, on Polanski's behalf, though I do not believe such a thing is allowed when the defendant has fled from the grip of justice.

Some of the film-watching mob have insisted upon a renewed hatred of the filmmaker, recently succeeding in having him expelled from the Academy of Motion Pictures. The esteemed Academy's ethical concerns seem to have caught up with them somewhat since they awarded him with Best Director about a decade and a half ago, for The Pianist.

I am not here to moralize today, least of all with jokes about self-stimulation of genitals. It should also be clear to all by now that I am no legal scholar. My knowledge of criminal law has mostly arrived ex post facto, as they say in the faraway Latin lands. Rome, they say that there, I think. All sentences eventually lead to Rome, or consulerent.