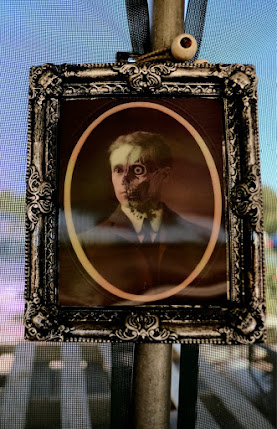 I have not felt very well, also. There's a sharp and considerable division within me, towards things that have long been just the way they are now. There is little hope of change or improvement without considerable effort from me, and not exactly in my chosen area of focus.
Having manic-depression produces an interesting set of emotional perspectives on given issues, particularly the perennial ones. Or, it can. Things are no truer only as they can be seen otherwise. Some things disappear when viewed any other way, which is a way of knowing something about your relationship to it as anotherness. Some things are only true because their story would suffer too greatly from being false as to make the storytelling dismal.
Mania and its welfare cousin results in witnessing events and communiqués from an enforced range of states, more disparate than most people would permit themselves, or might want to; beyond what some can achieve at their worst, and naturally.
I've developed a sense of emotional certainty, even as my displayed emotions seem to track and truck with the temperature, climate, and urgency of the state itself. I am always somewhere far off, speaking truths to the snow and the sands that have not slept for yet a dozen seasons. What remains is this dumb underlying truth: my reactions to things are a measure of my given tolerance at a given time. My mistake was tolerating things, not the fluctuating in my doing so. Things were not so clear twenty years ago, you see. This isn't twenty years ago, though. So. The dumbness was also a muteness to the knowing that time had changed around me, and I had watched, thinking myself a chronicler.
What this affliction does not assist with - generously providing as it can sometimes be as a source - is the knowing where to go next, when, when or, when not. Miasma, but at least it's mine.
I wish... that I could say... I've done any something interesting to prompt my exhaustion - taken on an obsessive, photographic interest of questionable merit that results in me leaving my job to make sellable art, on the road, representing myself legally and as a commodity; famous for making the most played Spotify playlist of the second week of October for two years in a row; owns a legendary email address; cross-dressing to visit the neighbor's, shaving very carefully before, wishing them the Happiest of Thanksgivingtudess!... ; get mentioned in a speech about addressing crime in Gotham; be discovered in Italy with my first wife   where homes are reasonable.   .we will be disabling our internet soon     a nearly perfect crime    just the two of uss ;  escribiré en español de ahora en adelante  ; ;  joined an online clan of Gen X'ers>>two and maybe a third forms virtual punk band, write songs, forever Reagan  ; ; - ;  that, or anything, anything, anything lelse ... then the nothings and the nothing  //  one sound of heavy trunks, two boxes moving in the attic when I don't have one, no upstairs neighbors in almost a decade, ghosts of tenement pssst; three footsteps in the basement, ill-tempoed breathing in the ears; I beg for every pleasure - I sense them best as I awake; I spent twenty years await, ok-await. What four.
.
Posted by Sean Q6 at 5:23 PM