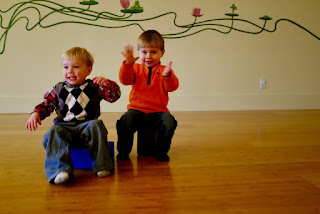 I found this little picture of the boy and his buddy, J. They were sure, adorable little fuckers. Being a dad was so much simpler then. I say that with neither comedic nor ironic intent. Being a father then was easier. I mostly only had to feed him and keep him away from danger and then feed him. Now I have to explain the mercurial and metaphorical nature of all types of danger, only to watch my words be taken at their flat, literal value. Me, knowing that I will spend my life repeating the same exact things that I have to say now, only in a hopefully different form.

Feeding him has become an ongoing negotiation, one in which I am always starting at a bargaining disadvantage. He has learned a basic aspect of the power of autonomy: it is much easier to stop somebody from doing something than it is to convince them from doing that same thing.

If something can be a single word then samething should also be permitted.

Thanksgiving was a minor family victory. We managed it without disasters large or small. We had to monitor the boy's intake of refined sugars, of course. That was the only thing that seemed to require our persistent attention, yet somehow it was the collective nature of it that caused the failure. Kids will work the Halloween-into-November candy angle. Everything else could be safely ignored, which led to our modest victory.

Grandma left this morning and gave me a short speech about our - mine and hers - ability to get along. I desisted from commenting on what I believed to be the real cause of this dynamic behavioral anomaly between she and I.

I don't like to remake waves after they have already crashed.

It takes all of my energy and looks so sad, and stupid, and pathetic, and demented from a distance.

That last part made me smile.

“... the sills of their disappointments walk outside their bodies aimlessly for the most part, locked and forgot in their desires—unroused.”