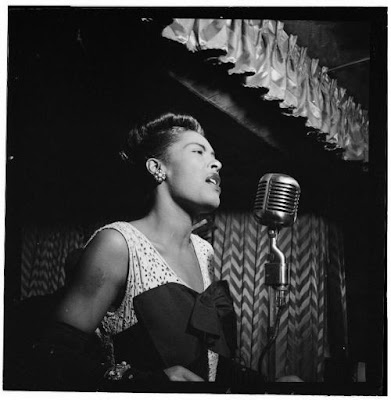 "Billie Holiday died in the Metropolitan Hospital, New York, on Friday, July 17, 1959, in the bed in which she had been arrested for illegal possession of narcotics a little more than a month before, as she lay mortally ill; in the room from which a police guard had been removed – by court order – only a few hours before her death, which, like her life, was disorderly and pitiful. She had been strikingly beautiful, but she was wasted physically to a small, grotesque caricature of herself. The worms of every kind of excess – drugs were only one – had eaten her. ... The likelihood exists that among the last thoughts of this cynical, sentimental, profane, generous and greatly talented woman of 44 was the belief that she was to be arraigned the following morning. She would have been, eventually, although possibly not that quickly. In any case, she removed herself finally from the jurisdiction of any court here below." - Gilbert Millstein
When Billie Holiday died she had .70 in her bank account.
Posted by Sean Q6 at 6:21 PM 0 comments

At dinner with friends 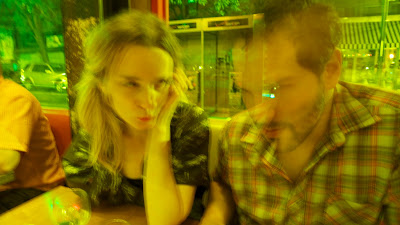 Nothing much to tell today. I save a lot of pictures that make no sense, that seem to capture some thing unseen, eery glimpses into a place the eye knows but the mind can only imagine, or perhaps recognize.
I don't even remember what it was I was doing when I took this one, nor they. I was at dinner with my neighbors in the Lower East Side, and this was the result.
Posted by Sean Q6 at 7:39 AM 0 comments

Links to this post
Labels: eery glimpses, Lower East Side 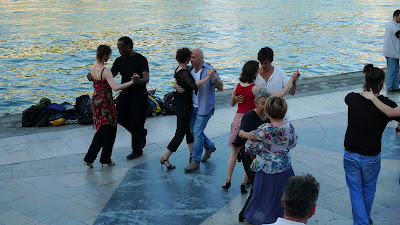 I love cities. I love the perspective they afford you. I love nature for this same reason but I suppose between the two, at least thus far in my life, I've been drawn to the city. As my wife and I were walking along the Seine we came across a group of people dancing, nothing out of the ordinary, though the music and the dancing did seem to have a unique "French-ness" to it, which of course filled us with that sense of romance that Paris is so famous for. If one were able to turn their head left from this picture and look back down the river then they'd see The Cathedral of Notre Dame across the river on the island. We walked further west up the river from here and meandered across the bridges.
I like this picture because my eye seems to read it from left to right, where you first see the black and white couple, something you seem to see much more of in Paris than you see in New York, then there is another couple that almost serve as a bookend couple to them, then the eye follows the line of dancers to the couple of women dancing together. I suppose because I hadn't noticed them the first time or two that I looked at the picture I tended to like them even more when I did discover them.
The music was being played from one of those old portable stereo systems that were known as "ghetto-blasters." It was arranged on a set of steps above the river where we were standing, facing them, playing a sort of French-swing. They've seemed to make a resurgence in New York as well, those portable stereos, jamboxes, boomboxes.... 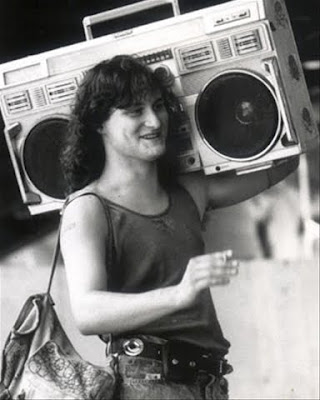 (photographer unknown, found on internet)
Posted by Sean Q6 at 7:40 AM 0 comments

Links to this post
Labels: boombox, ghetto-blaster, jambox, The Seine 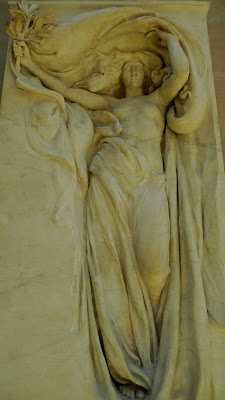 A friend of mine is sick. Nobody knows what is wrong yet.
I will kneel and ask the universe for you,
ask for everything, for you.
I will whisper pleas to the tress and moon,
bring kindness and benevolence,
and mercy soon
Posted by Sean Q6 at 11:17 AM 0 comments 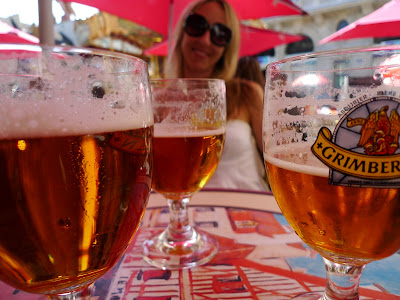 I've been putting together a web gallery of pics from my honeymoon with my wife. She takes offense at this picture, stating that its only purpose is to focus on alcohol. That might be true, though she is at the spiritual center of the composition. She's practically a Christian saint the way that I've adorned her with gold, and Frankenstein, and Mr. stir... She says that she doesn't want our honeymoon pictures to focus on drinking. I maintain that's virtually all we did and we're very lucky to have any pictures at all suggesting otherwise. This picture is especially offensive to her as it seems to focus on an excessive amount of alcohol, which happens to be delicious Grimbergen bier. When she went away to the restroom I tried to order two beers, in French of course. The word "deux" wasn't the first thing that came to my mind, instead "trois" seemed much closer (phonetically) to two, so that's what I ordered, "trois biers." The beers arrived at our table right about the same time my wife re-appeared from the restroom, much to everyone's surprise and confusion. To avoid any more awkwardness I simply agreed that all was right and this is what we wanted and I sat there with my wife, acting as if there was perhaps a third person coming to meet us, all the while sipping two beers in the perfectly normal manner of a man drinking beer anywhere, happy to be on holiday.
I suspect this picture might not make it into the final selection of honeymoon pics, and there was a story to tell, however meager. I simply didn't want the story of the extra Grimbergen to be lost.
There are other pictures that were never in any danger of making their way into the final cut of our Francey-moon pics. Ones that somehow never got deleted from within the camera, oddly-angled mistakes, some drunken, some just shots of nothing seemingly interesting, the glowing warmth of alcohol and love imbuing the moment with some special transitory significance that, for whatever reason, left no evidence of itself in the resulting picture.
But I like this picture of my wife. It reminds me of times we spent together when we were younger, before being married, partying, and drinking, and wearing sunglasses while drinking beer... in Manchester, or Los Angeles, or Costa Rica, even New York. It reminds me of a less encumbered time, one in which we gladly gave up to one another the very postures we were projecting, when we were falling in love, and laughing and finding our way through it all. And yes, we were drinking, and still laughing more, and pretending. But I still see her now sometimes like I saw her then: lovely and tipsy and silly, and becoming mine.
I think I might have even shared the third bier with her, such was my intoxication with the moment.
Posted by Sean Q6 at 7:30 AM 0 comments 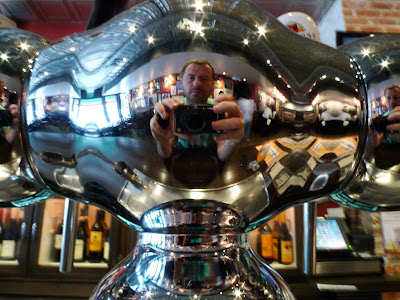 My buddy from Florida came to New York to visit. So I doubled the amount of beer I normally drink.
He is a photographer so I brought my camera with me everywhere I went, hoping to learn more. I learned that I want another camera, and probably would be better off with a small camera bag. Cargo-shorts have their limitations.
We drank wine and beer and went to the museums: 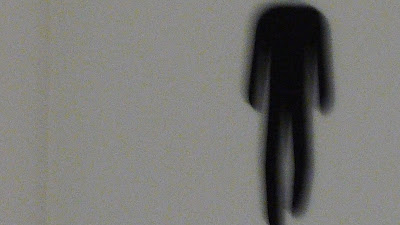 There is this great parabolic mirror at The Metropolitan. I take my picture in it every time I am there. It is next to a decaying shark by Damien Hirst. If you stand several meters behind the mirror you can hear everything that is being whispered by anybody who stands directly in front of the mirror, but most people don't know this. It is fun for a few minutes each time I go to the museum. If it were up to me I would record what was being said and then broadcast it in the next room a minute later, so as they left one room they would re-hear what they said in the next. Is that cruel? 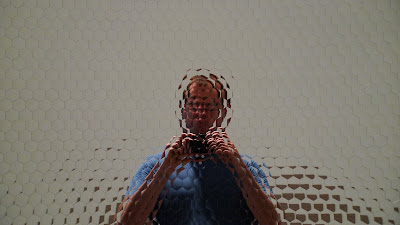 A nap with the bust of Guillaume Apollinaire 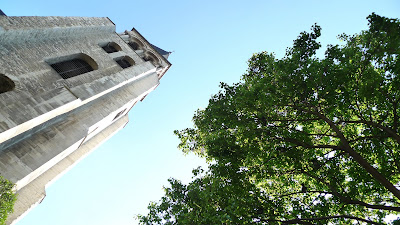 "Come to the edge, he said. They said: we are afraid. Come to the edge, he said. They came, he pushed them and they flew." - Apollinaire
While in France with my wife we decided to stop and take a nap in a church courtyard. This is approximately what we saw as we reclined on the grass, chatting, as we fell towards sleep, what we saw as we awoke, dreams still drifting across our eyes, rising above our heads, forever away from us.
We had walked most of the day, not knowing exactly where we were going, stopping occasionally for cheese, wine, etc.
At the entrance to the church courtyard there was a bust of the poet Apollinaire.
"It's raining my soul, it's raining, but it's raining dead eyes."
I thought this was an interesting poet's bust to have at the entrance of a church courtyard. My memory of him was not as a Christian, quite otherwise in fact, a modernist, a living sacrilege.
"Memories are hunting horns whose sound dies on the wind."
Perhaps everyone in France is considered a Christian...
"Haven't we drifted far and lost, From fair dawn to dreary dusk?"
At least they must all be considered Catholics, I wondered. 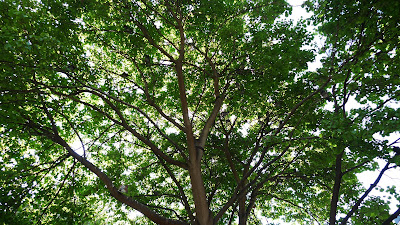 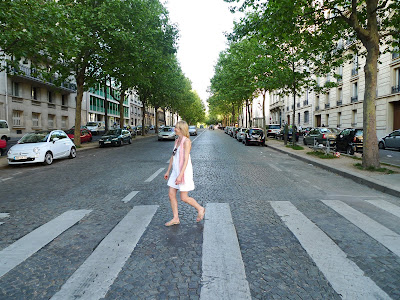 My wife and I just returned from our honeymoon to France. She is a Beatle's fan, so we went to the exact spot where John, Paul, George, and Ringo never once stood together, and took this picture. The very next frame I believe she shows her panties. She'll probably make me delete this... the sentence, not the picture.
More pictures to follow. I've discovered that I save about 1 picture for every 12 that I take. I am lucky to have discovered this hobby after the digital revolution. Though it costs me no extra money to shoot in RAW, I am still shooting in JPEG format. I've been told all that will change... 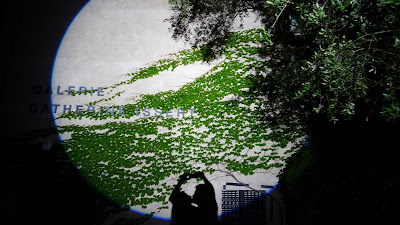